Faith and prayer are the vitamins of the soul; man cannot live in health without them.—-Mahalia Jackson

The power of prayer has a way of granting miracles.  Thus the case of Bobbi Kristina Brown.

Bobbi Kristina Brown has  awakened  from the coma  she’s  been in for over a month and a half a source close to her family tells crownheightsmom.com exclusively.

“Bobbi Kristina  is out of the coma” says a source close to the 22-year old’s  family . “She  is opening  her eyes but isn’t talking yet,”  adds the source.

For  family and friends  of the aspiring singer and especially for her father R&B singer  Bobby Brown this  must come as  the best news  since that fateful Jan. 31, 2015  day when Bobbi Kristina  was found unresponsive  in the Roswell, Georgia home she shared with boyfriend Nick Gordon. She was found  unconscious and in a bathtub – eerily similar to how  her mother Whitney Houston had died in 2012.

“Krissi awakened about two weeks ago,” says the  source close to her family. Could Bobby Brown have  hinted  at  this news  in a March 3 press release his lawyer sent out saying, “We thank everyone that supports Bobbi Kristina and God is hearing our prayers.”

One can  imagine how  thankful Bobby Brown must be feeling. The singer  has continuously asked for  prayers  for his daughter Bobbi Kristina and as the  weeks have gone by and   we have  seen the pictures of his daily trips to and  from  the  hospital  to be at her bedside. He has been a dad who is enduring what happened to his daughter  publicly while  asking for privacy from the press as he continues trying to hold it all together for himself and his family  while  the  criminal investigation  continues  into how his daughter  ended up in the condition she’s in . Most parents  would prefer to  never go through a situation like this, but if they had to be in  a situation like this they would prefer  to go through it  privately. It is good to see that the R&B star  has held firm to his faith to pull him through and to see that in some ways these prayers are being answered. Crownheightsmom reached out to Bobby Brown’s camp for a response  and was told  to refer to what  Bobby has said  in his press releases, saying, “We continue to request privacy in regards to my daughter’s medical condition.  We thank everyone that supports Bobbi Kristina and God is hearing our prayers.”

Not out of the woods though progressing slowly . “She is not recognizing people’s faces but she has eye movement and  is responsive to voices and touch,”  the  source tells crownheightsmom exclusively. This progress, says the source, is what prompted the family to  move her from Emory Hospital to a specialized facility,  still in Georgia, that can better treat her.

Visitors to see Bobbi Kristina since her improvement have included her grandmother Cissy Houston,  81  who arrived about a week ago  to visit  her  granddaughter says the  source.  Cissy  last visited  in early February.  As of this writing  Cissy is reported to have returned  to her home in New Jersey .

It definitely feels great to hear  promising news about Bobbi Kristina’s  condition and as she progresses we hope to  keep well wishers up to date.

As Bobbi Kristina’s   condition continues to improve the source close to the  family  adds,  ” I would like to  ask people to keep praying for Bobbi Kristina. She still has a long way to go.”

Bobbi Kristina Brown  turns 22-years old in  two days.  She  remains on  life support in a medically induced coma  at Georgia’s  Emory University Hospital, 28 days after being found at home  unresponsive in her bathtub.

Last week reports surfaced  that the  21-year old  suffered  a violent seizure  after she was taken out of her medically induced coma by her doctors . She has since been induced to stop the seizures and is  back in a coma
“These seizure are  not new,”  a source close to the families tells crownheightsmom.com exclusively.  “She has been having them,” adds the source.
Daily visits to   the 21-year-old’s bedside  come from  family on both sides – the Browns and the Houstons- including her  father  Bobby Brown  and her grandmother Cissy  Houston, the pair,  whom have not  been seen  together since  Whitney’s  funeral in 2012 .  Cissy, who arrived on Feb 6 had been a constant,  although recently there has not been sightings of her. Cissy reportedly had  been singing to her granddaughter   and even  celebrate  her birthday early with roses .
Cissy  also only stayed  a week a source close to the Brown and Houston families  reveals to crownheightsmom.com exclusively.  “Cissy left Atlanta on Feb 12. She’s back in New Jersey.” Adds the source, “People  will probably ask,  why isn’t she  still there with her but  Cissy is not that close to her granddaughter plus people must understand she’s  old and this  takes a toll.”Also adds the source, “There is not much  Cissy can do  there, at the end of the day  Bobby is there and any decisions made  regarding Krissi’s health and well-being will come from him.”

Meanwhile, second  cousin, Dionne Warwick, 74,  has been unable to make it to Atlanta to see Bobbi Kristina .  Says a Houston family source, “Dionne had a fall in January  and hurt her ankle and  is now  back in the hospital,  but just  to  get rehab on the ankle.” Adds the source, “She was admitted because she wouldn’t  keep off her feet.”  Warwick was reported to have fallen in her bathtub   in January. She was just re-admitted to the hospital  recently in order for the rehab and physical therapy to begin and to work..

A parent will love and protect their  children by all means necessary and Bobby Brown is no stranger to this . In 2011  the R&B singer  when questioned about Bobbi Kristina’s  by PEOPLE responded,  “I am protecting my daughter.” Since his arrival to Atlanta,  Brown  has been a constant at  his daughter’s bedside and even  delayed an upcoming  Australian tour to be by her side. His protectiveness now though many may say has come a little too late. Says a source,  “She needed  that fatherly protection constantly the last three years.”
As Bobbi Kristina’s  birthday approaches wishes for her recovery are being posted daily by well wishers on her social media .  Ellin LaVar of LaVar Hair Designs  in Harlem and the longtime hair stylist of  Whitney Houston  says,  “I am speechless and saddened by the circumstances but  I am keeping Bobbi Kristina  and Cissy in my prayers.” Adds LaVar,  “I am praying that God will bring Bobbi Kristina through this difficult situation.”…..by DEBRA LEWIS-BOOTHMAN 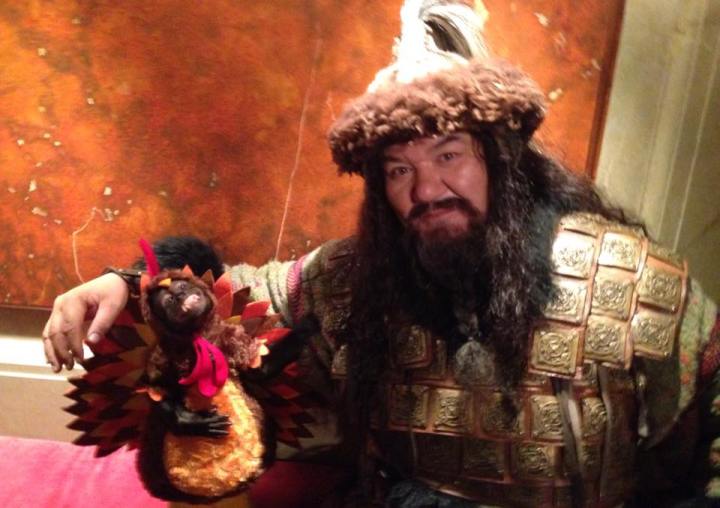 Not up on the new lingo? Need help learning but don’t know whom to call. No worries just ask actor Patrick Gallagher currently on the big screen in Night at the Museum: Secret of the Tomb. 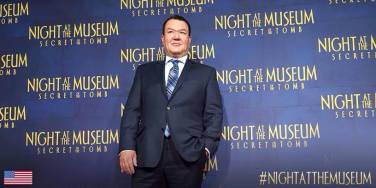 “I have been in all[Night at the Museum] and the best thing is I get to invent a language,” actor Patrick Gallagher shared with families during a MOMS screening of the third installment of the kid favorite film franchise on December 18 in New York City. Gallagher who plays Attila The Hun in the previous two installments dons the costume in what seems to be the movies’ final lap.  Fans of the actor can also see him grace the small screen  on the Jan 5 episode of NCIS-Los Angeles. He sat for questions from MOMS hosts Denise Albert and Melissa Musen Gerstein including  kids in the audience.

“It’s all made up,” he shares of the gibberish he has made cool with kids since donning the  Hun costume eight years ago. Adding his highlights of working on the film franchise includes the location shoots that has taken the Canadian to sets in New York, Washington DC and London. Although he says there are “a lot of long days and my costume is kinda hot,” he doesn’t mind it because as he tells a little tyke in the audience who asks how it feels to be in a movie,”Its very cool to be in a movie especially a movie this big.”

On returning for his third time around on  the Night at the Museum. “I feel lucky to be in the movie,” he says of the role he has played alongside Ben Stiller, Ricky Gervais and the late Robin Williams since 2006. The movie is one of Williams’ final major movie roles before his death this past August.

Seeing Williams at his best in the role of Teddy Roosevelt made viewers miss him and cherish his memory and laughs that much more .

Gallagher does have one character with whom as he puts it, “has bodily functions that happen on my shoulder a lot.”  That would be Dexter the monkey whom he adds is also ” getting a little big headed, a little diva but is amazing and amazing to watch.”

Go on out and catch the movie this holiday season. As well as  pick up the previous two  installments .

RATING: BY KIDS ONLY: On a scale of 1-5  Popcorn Stars for keeping kids engaged and  loving the franchise. Night at the Museum: Secret of The Tomb earns 4  Popcorn Stars. Note this rating is per my 8-year old daughter Kameko.

Catch Night at the Museum at your local movie theater.